The Science of Social Structure

The vast majority of modern governments, businesses and organizations utilize a social structure called vertical collectivism. Vertical collectivism is top down system of organizing human groups which amplifies power by stacking layers of authority in pyramids. The result is a highly stratified society where those on the bottom have little or no say, and are left to fight over scraps from above. 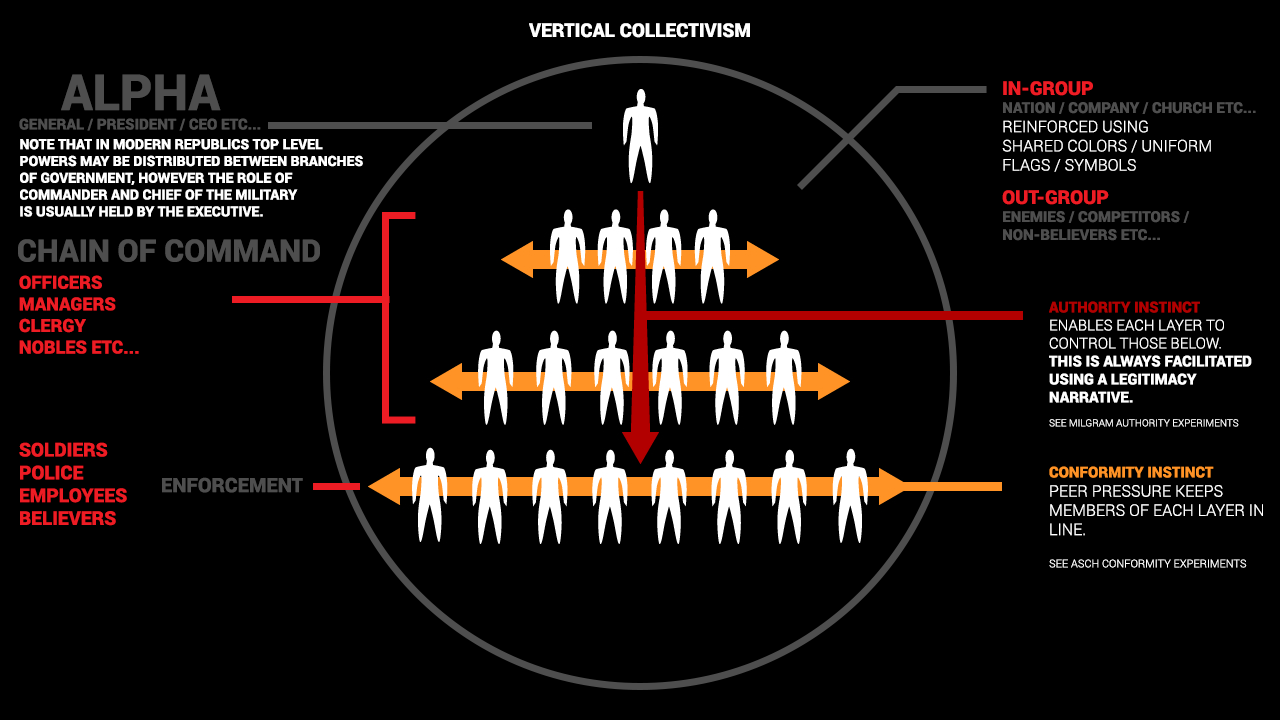 Vertical collectivism is apolitical. Capitalists companies and Communist regimes both use it without contradiction, as do republics that call themselves democracies.

The vertical model was born of military strategy. A general or warlord alone can only control a small army, but by using subordinate officers in layers of rank, a single individual, or a small ruling class can dominate millions of people and vast territories. This is why a state is often defined as the monopoly on violence within a region.

Vertical collectivism didn’t spread to every corner of the globe because it improved peoples lives. In fact modern anthropologists acknowledge that the transition to this way of life was associated with reduced life expectancy and a decline in virtually all measures in health (up until very recently). Vertical collectivism spread like a cancer because it is brutally effective in the in the context of war. Every culture that it encountered was either crushed on the battlefield or forced to copy the model to survive. The dawn of civilization — as many euphemistically refer to it — is a story of conquest and colonialization that began approximately 10,000 years ago and continues to this day. This was not however, the beginning of the human story.

For over 300,000 years — long before the first empires of Asia and Europe began to absorb surrounding tribes — humans organized themselves using a very different model. Rather than building top down, stratified societies that concentrated wealth and power in the hands of an upper class, these cultures organized horizontally.

Organizing horizontally didn’t mean that there were no leaders. The authority and instincts are far older than humanity. Like all social animals, our species is hardwired to follow those who demonstrate courage and intelligence. However in horizontal societies disparities of wealth and power were significantly smaller. The leaders and councils responsible for group decisions were not insulated by armies and law enforcement conditioned to obey without question. Defense and order were maintained by an armed citizenry, bound by a code of conduct. This dynamic forced leaders to be directly accountable to the population. Their power was rooted in their ability to communicate with the people, build consensus and chart a course of action to the benefit of all.

The fact that horizontal societies required leaders to work with the public in such a personal way had one obvious disadvantage: it limited the size of the group. After all, why would someone voluntarily follow someone far away that they never met?

There is however, a way around this limitation. By forming federations horizontal societies can expand their sphere influence significantly. An example of this adaptation can be found in the Iroquois confederacy which unified 5 tribes for hundreds of years in the region that came to be called New York. Each member tribe in the confederacy had their own culture and and internal governance, but a set of shared values enabled them to cooperate economically and militarily. If one tribe was attacked they quickly mounted a common defense.

Many historians believe that United States federal system was based on the Iroquois model. One significant difference however, was that the Iroquois had no central government. There was a central council comprised of representatives from each tribe, but this council had no power to enforce its will. Each representative was tasked with building a consensus that would resonate with their people.

Make a one time Donation

This site (and the associated content) is maintained by a very small team (with very limited resources). If you see something that you feel that you could improve, contact us through our volunteer page.

Paradigm for the Next Generation

A Positive Course of Action